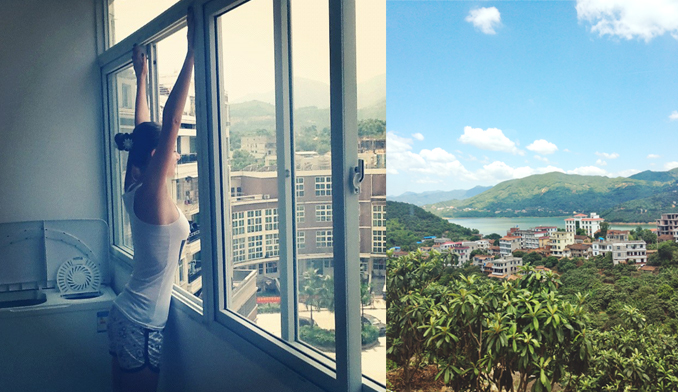 Each trip reserves a lot of memories, especially if it is a model’s contract in another country. Nothing else pleases that much as the luggage packed up, and chop before starting a job at the another continent. New friends, new places, new emotions, and thousands of photographs that show all that paradise. Castings, fittings, rehearsals, walking around town and shopping! And after that – returning of tired and barely walking girls back to their new home. 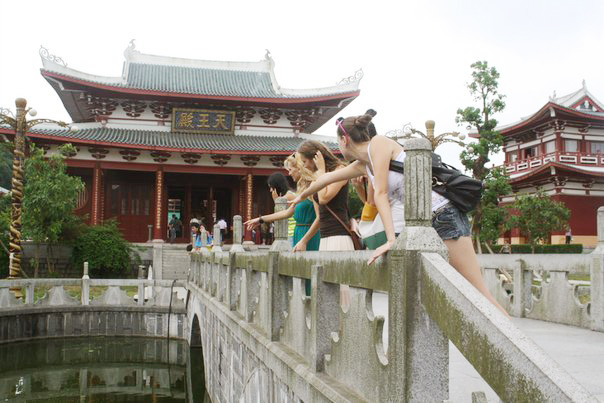 At first, models live at hotels where the rooms have large windows, huge TV-sets, plush beds and bathrooms with mirrors from floor to ceiling. As per the contract’s condition, the living place should correspond to the European standards for apartments or houses. And here begins a time of adventures, when at least 10 models from all around the world, with different personalities and views on life, start leaving under the same roof. 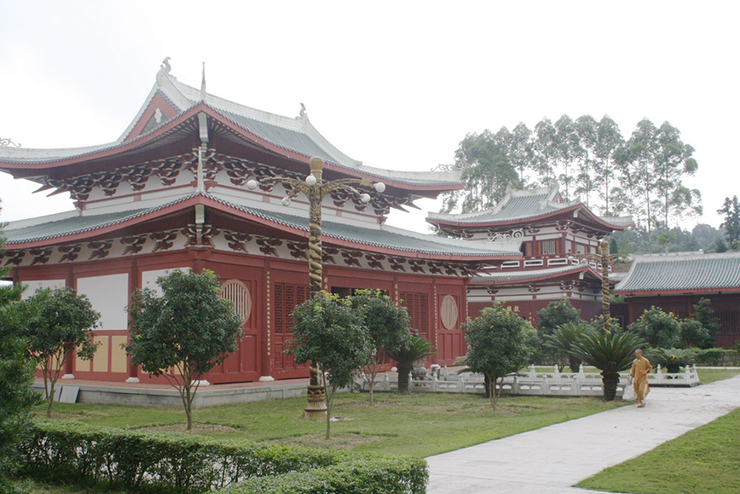 This time my model trip is to wonderful and amazing China. Here we have a two-story apartment with a communal kitchen, two showers, and six spacious rooms with large windows and stunning views of the entire city. For the first time opening the doors of a new territory, the unspoken competition for the best room in the house takes place: models literally start running around the house to find and choose the best place for themselves!

I am lucky to get into the large room where I will be living with three other girls up to the completion of the contract. It’s only after a week of living together when the doubts start overcome me as to the accuracy of that choice. Simultaneous talking on Skype and the completely different musical tastes of the girls can be keenly felt now. 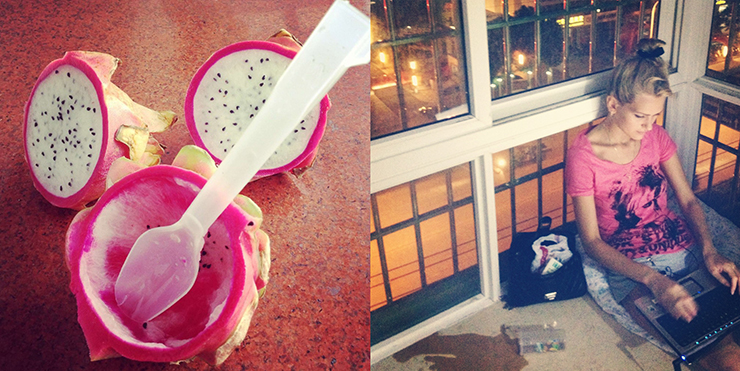 Each of us has her own bed, which is for some reason not soft and comfortable this time but a wooden one. Soon, everyone starts to realize why we got those bruises on the body on the next day. The second miracle of the apartment is our wardrobe which is, frankly speaking, appears to be a frame covered with some cloth, with one shelf and a zipper. It turns out that the “European standards” can be very surprising sometimes.

Washing machine is another surprise because it’s only option is a cold wash! And when we turn it on, it starts moving around the kitchen, each time getting closer and closer to our mini-fridge, tightly filled with vegetables, fruits and yogurts. If to open it, you will find yourself in the fairy world where your products get lost.

An interesting nuance of living in such conditions is the neighborhood with Chinese citizens, who can spend hours looking out of the window, watching and taking photos of the European girls. Thanks God that China blocked all Russian sites, as well as notorious Facebook and YouTube. 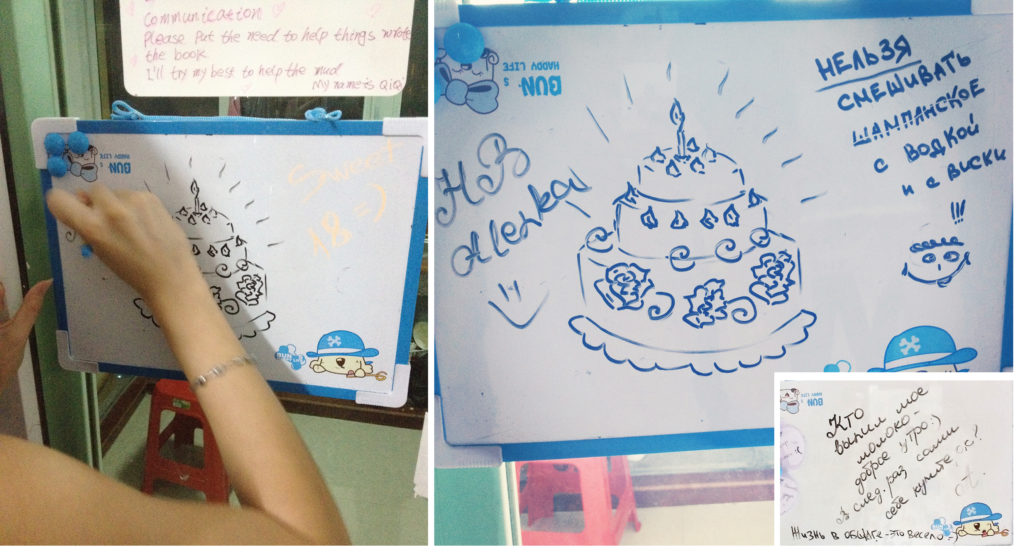 But the most favorite piece of this temporary home for me is our magnet board where we always put the news and draw funny pictures or write something like “Let’s do a farewell summer party!” or “Who used my shampoo? Go buy a new one!”.

When you have one bathroom that you need to share with seven other models, you can notice that many things from time to time just disappear from it. The jar with my precious burdock oil (which has a tremendous effect on hair growth), specially brought by me to China from home, was not an exception. It strangely became half empty and that got the “final nail in the coffin”, so we started to plan our revenge. We decided to pour the new “recipe” in this bottle: sunflower oil, a few drops of medicine of a bright green color intended for throat treatment, a little bit of detergent for dishes and… here we go, the new recipe is ready! We patiently waited until the bottle with our special mixture became completely empty and then arranged a room meeting to let the other models know about our tricky plan. In such a way we found out who was the little thief. We did not call names but got to know who was the person we better hide our shampoos and conditioners from.

Everyone says that the modeling business is cruel. There are no friends in this business and every person is for himself only. But despite all the above mentioned, life in a foreign country pulls together. When you are far away from home you need to feel support, and thus those who were like strangers for you at the beginning – they now become your second family. And if I would have to choose between the modeling apartments and a hotel, I would definitely choose the first, because it’s always a great adventure and experience! 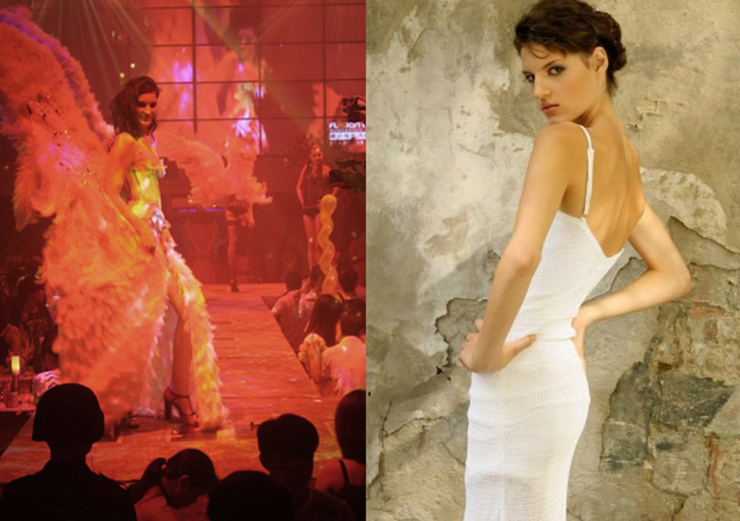 The contract is getting to its end, and this is like the two scales: on the one hand – sadness and sorrow of leaving the girls, the city, country, work… and on the other hand – the joy of coming back home! Bon voyage!