Home
/
Fashion Talks
/
Do They or Do They Not?

Do They or Do They Not? 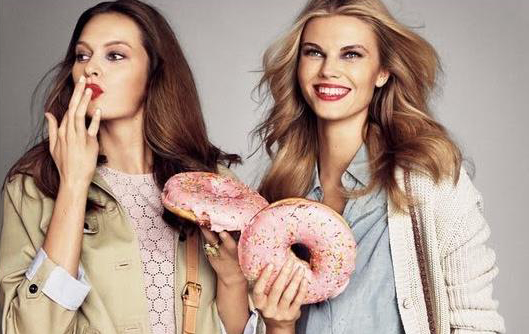 We’re just thinking here… was there ever a moment in the whole fashion industry history of nowadays at all when these pretty little things would not be attacked with all the offensive statements concerning how skinny they are… But the truth is that the objects of persecution of yours probably and very likely eat way more than you do! So, go figure! It is worth noting that the models don’t even make any secret of that. It works opposite way: you can literally take a sneak peek at their daily menu. Is it healthy… or not really? We’re sorry to break the stereotypes but let’s face the truth — stop torturing yourself with the constant debilitating hunger strikes because you’re seriously the only one who’s doing it! It’s funny indeed but there comes a day when all the girls out there will finally see the difference between diets (which anything from the endless list might be assumed as one: vegetarian diet, detox diet, organic food diet, low glycemic index diet, low-carbohydrate etc.) and eating disorders on the other hand! There is nothing fashionable, attractive or “must- do” in refusing to eat. Let us say more — healthy life style is what will always be in trend as well as glowing skin, bright eyes and silky hair. Unfortunately it’s impossible to get it by punishing your body to death by not giving it what it simply needs for normal functioning. The fashion industry’s attitude towards diets, weight and food in general was obviously exaggerated in the film The Devil Wears Prada when Miranda Priestly’s first assistant said: “See, I’m on this new diet, I don’t eat anything. And right before I feel I’m going to faint, I eat a cube of cheese. I’m one stomach flu away from my goal weight.” See? That is exactly what you should NOT do! We must admit it all has changed so much lately and of course there’s no smoke without fire. There certainly were the times when models felt under pressure to be thin. The best example of a bad impact is the size four Canadian model Coco Rocha who once spoke out about the pressures on her to look as a teenager and against the demand for models to be size zero ‘I was told: “The look this year is anorexic. We don’t want you to be anorexic, just look it.” This message was especially troubling given the fact that I was only 15.’ – says Rocha. The model has been rejected for being ‘too fat’ and had lost out on catwalk work because she refused to lose any more weight when already being too skinny. ‘It took me a long time in the business to realize I didn’t have to do everything people told me I should if I wanted a career. You know what, I stopped caring, if I want a hamburger, I’m going to have one. No 21-year-old should be worrying about whether she fits a sample size.”- said Coco Rocha. And she was right. For most women it’s just not genetically possible to both fit the sample sizes made by designers and eat normally so the major aim fashion industry has finally gotten by now is to prevent young women against eating disorders. Looking through the glossy magazines and watching naturally thin models too many girls tend to do ridiculous cleanses and diets, to use extreme diet pills and other detoxing methods which is nothing but insane delusion. All in all this systematic approach may lead to nutritional deficiencies, which can in turn damage the immune system, cause dry skin and loss of muscle or bone density. This topic just can’t be ignored. So again the conclusion is – you should eat, not to overeat and not to eat less than your body really needs…you gotta eat healthy! It’s such a sophisticated tricky thing that might be comprehended and learned. 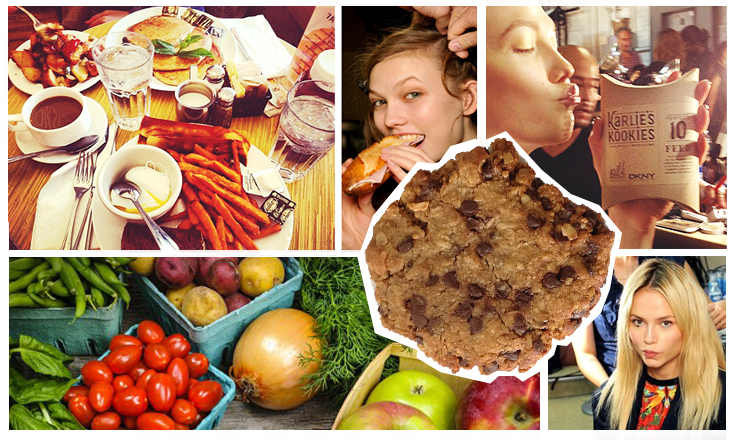 Sometimes people neglect the reality believing what they get is what they see not knowing what it really is. By seeing the pictures of another world known supermodel Karlie Kloss ranked 2nd on the Top 50 Models Women list unlikely you can claim her biggest passion is cooking. And she really proved it by hand-delivering and personally serving up her very own Karlie’s Kookies for the crowd to get a taste at FNO. She explained her reasons behind creating them: “I am really into health and nutrition and baking has always been a passion. I take these cookies on shoots, to fashion weeks, to my friends’ houses — everywhere. They make you feel good and you are doing good”. Kloss is perhaps best known for her thin and really tall body which has appeared in much-criticized fashion magazine spreads lately. In December 2011, Vogue Italia removed from its website an image of Karlie, who posed for the cover story called Body by Kloss. The photos, featuring the supermodel were nixed after some suggested that it had been heavily photoshopped, while others were actually celebrating it on pro-anorexia websites. Another controversial photo of supermodel and her protruding rib cage have sparked outrage. The picture appeared in the October issue of international fashion magazine Numéro, where the 20-year-old poses topless with her hands behind her head. But the original photo released by American photographer Greg Kadel and his studio shows her jutting ribs and collarbones, confirming that the photo was airbrushed and sparking a wave of controversy. According to the Daily Mail, the decision was not made for aesthetic reasons but to avoid a repeat of the scandal that broke out the last time Kloss appeared naked — in a shoot for Italian Vogue in December. In fact Karlie doesn’t have eating disorder; she’s simply an extraordinarily thin former ballet dancer which she gave up after being told she was too tall to be it. Who would guess the model struggles to put on weight? “I’ll tell you one thing’s for sure: if you go to an eating contest with Karlie, you’ll lose,” says her grandmother. “She has a healthy appetite. She carries snacks with her all the time, but they’re healthy snacks — fruits and veggies. I’m sure if you look in her bag, she’ll have a ton of snacks. She eats the whole time. She’s so busy; you’ll find her eating if she’s not sleeping.” Take a look at all them tweets and Instagram pictures models take during the fashion weeks – they literally demonstrate huge tables of junk food at the backstages, it’s nothing but a carbs feast. Actually one of The CFDA’s Health Initiative guidelines was to supply healthy meals, snacks, and water backstage and at shoots and provide nutrition and fitness education. And they really do it! They gave the models options.

So what do models eat?

Agness Deyn: “I’m no size-zero. I still eat fish and chips. And pizza. It’s my favorite food and they do the best ones in New York. People think models starve themselves but not me. I eat really normally. I think it’s important to be healthy, and for that you are allowed a little bit of everything. If you eat too much you put on weight, if you have a happy medium you stay the same. Everything in moderation, especially pizza!”

Natasha Poly: “My friend was vegetarian and I thought about her “how she can feed so?”, but one time we lived together and she taught me to cook vegetarian food. I decided to be a vegetarian about one week. From this time I don’t eat meat 8 years. Besides this I follow the simple rules: don’t abuse of fat and sweet, drink a lot of water, take vitamins. I lead a healthy lifestyle, but without fanaticism. Sometimes I can to eat cake, or drink glass of wine.”

Karolina Kurkova: “I eat very clean and fresh. I wake up and I have a green juice with a little protein powder and glutamine mixed in. Then two hours later I have two hard-boiled eggs. Then, two or three hours later I’ll have 10 nuts, like walnuts or almonds. Then I’ll have grilled fish with vegetables and salads. And then again a green juice. I just keep it simple.”

Miranda Kerr: “I am a blood type A and more often than not I eat specifically for my blood type, I also eat low-GI, high-alkaline foods, drink filtered water and eat mostly fresh produce and very little meat. Some of my breakfast combinations include wheat-free toast topped with avocado and blueberry yogurt. Also I have a weakness for chocolate.”

The bottom line is that the two most essential factors for maintaining a runway body are nutritious food and exercise. Of course most models get away with eating certain not-so nutritious foods thanks to a high metabolism but, in general, these beautiful girls keep their bodies shaped by working out and eating healthy. 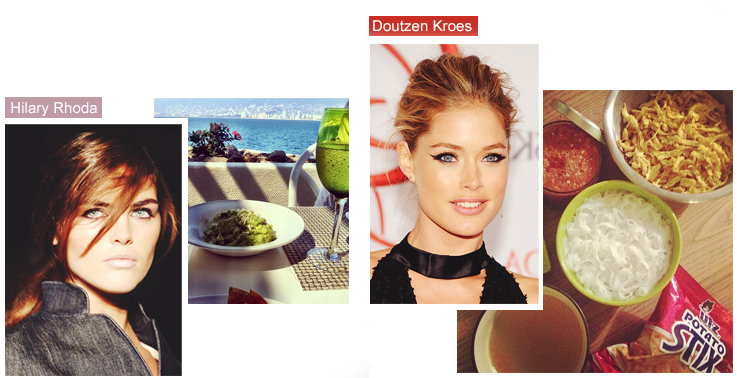